The public plaza under construction north of Gainbridge Fieldhouse now has an official name as well as plans for two public sculptures created by Honduras-based artist Herman Mejia.

Bicentennial Unity Plaza, named in reference to the 200th birthday of Indianapolis in 2021, will be home to a large arched sculpture titled “Together” and a dome-like installation titled “Sphere.”

Amenities including the sculptures, a community basketball court/ice rink and public restrooms are being funded through a $28.5 million grant from Lilly Endowment Inc.

The Capital Improvement Board, which owns Gainbridge Fieldhouse, announced the plaza’s name and art installations Friday as part of ongoing renovations to the downtown arena, 125 S. Pennsylvania St.

In addition to being a site for pickup basketball games in mild weather and ice skating during winter months, Bicentennial Unity Plaza will be used for community programs, civic conversations and artistic performances.

“It’s a great event space, and 80% of those events are going to be community-based,” said Andy Mallon, executive director of the CIB. “We’re really focused on creating a destination that benefits all of central Indiana. Downtown Indianapolis is everybody’s neighborhood. Everybody has ownership in downtown.”

Construction of the plaza is expected to be completed by the end of this year. Mejia’s sculptures likely will be installed in early 2023, Mallon said.

The larger artwork, “Together,” will be 30 feet tall and 110 feet long. Made of stainless steel and limestone, “Together” features two rising arcs that are nearly aligned but need a third component, a limestone keystone, to join in the middle.

Mejia was partially inspired, Mallon said, by the “Landmark for Peace” sculpture at Dr. Martin Luther King Jr. Park, 1702 Broadway St., in Indianapolis. “Landmark for Peace” features depictions of King and Robert F. Kennedy, two leaders assassinated in 1968, reaching toward one another.

Mirrored alcoves at the two bases of “Together” are designed for visitors to capture photos.

The “Sphere” sculpture is primarily geared for visitor interaction. Two screens inside the artwork will display live images of people at the plaza as well as photos of Indianapolis landmarks. In a nod to basketball played inside Gainbridge Fieldhouse, “Sphere’s” height is 23 feet, 9 inches, or the distance between the NBA 3-point line and the basket.

According to the CIB, the present allocation of the Lilly Endowment grant breaks down as: 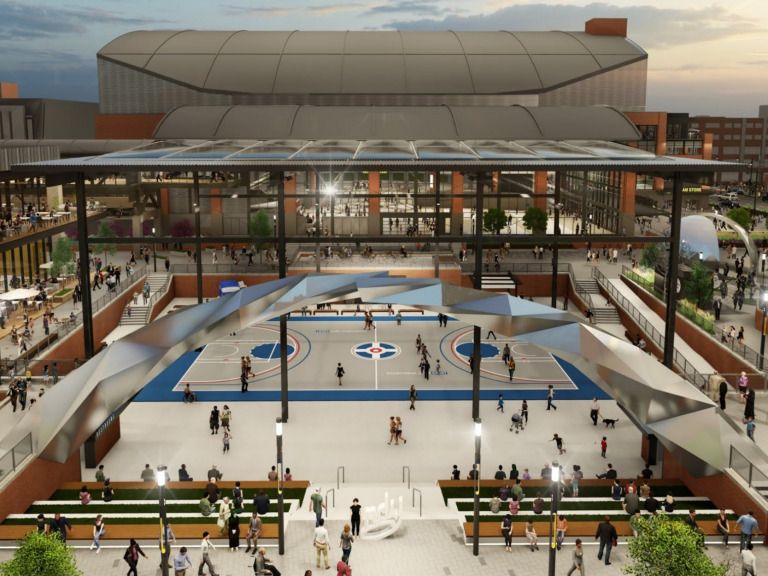 An arched sculpture titled “Together,” created by artist Herman Mejia, is seen in the foreground of this rendering of Bicentennial Unity Plaza north of Gainbridge Fieldhouse. (Image provided by The Capital Improvement Board)

Get notifications for events, news, and press releases.

Search for Issuers by state, issuer name, or CUSIP.

No results match your search term, but we're constantly adding new issuers to the BondLink platform. Looking to learn more?

Thank you! Looking for another issuer you don't see here?

UNDER NO CIRCUMSTANCES SHALL THE INFORMATION ON THE SITE CONSTITUTE AN OFFER TO SELL OR THE SOLICITATION OF AN OFFER TO BUY, NOR SHALL THERE BE ANY SALE OF SECURITIES IN ANY JURISDICTION IN WHICH SUCH OFFER, SOLICITATION OR SALE WOULD BE UNLAWFUL PRIOR TO REGISTRATION OR QUALIFICATION UNDER THE SECURITIES LAWS OF ANY SUCH JURISDICTION. OFFERS TO PURCHASE SECURITIES MAY BE MADE ONLY THROUGH A REGISTERED BROKER-DEALER AND THROUGH AN OFFICIAL STATEMENT.

BondLink has not prepared or developed any of the Content on the Site and the Content available on the Site with respect to any issuer is not maintained by or under the control of BondLink. The content on this Site with respect to any issuer was specifically authorized by that issuer to be communicated through this Site. BondLink has not reviewed such information in any respect and has not checked such information for accuracy, and in some cases, the information provided may not have been viewed by BondLink. The Content contained on the Site has been provided by the applicable issuer and is included for general informational purposes only and is provided without warranty of any kind and, in particular, no representation or warranty, express or implied, is made or is to be inferred as to the accuracy, reliability, timeliness or completeness of any such information. The Content presented on the Site speaks only as of the date the Content was prepared by the issuer or other third party and has not been updated since that date and as a result, may not address all factors which may be material to an investor and may contain omissions of fact or statements that are not accurate because of the passage of time or changes in facts or circumstance subsequent to the date of such Content. Consequently, no person should make any investment decision in reliance upon the Content contained on the Site. See “Terms” for the full terms of use of this website including your release of any and all claims against BondLink for use of this website.